Summary of projects and alliances

Summarised below are the current projects and alliances of Lithium Australia NL (‘LIT’). Further information on each can be accessed via the ‘View more’ links within this summary. 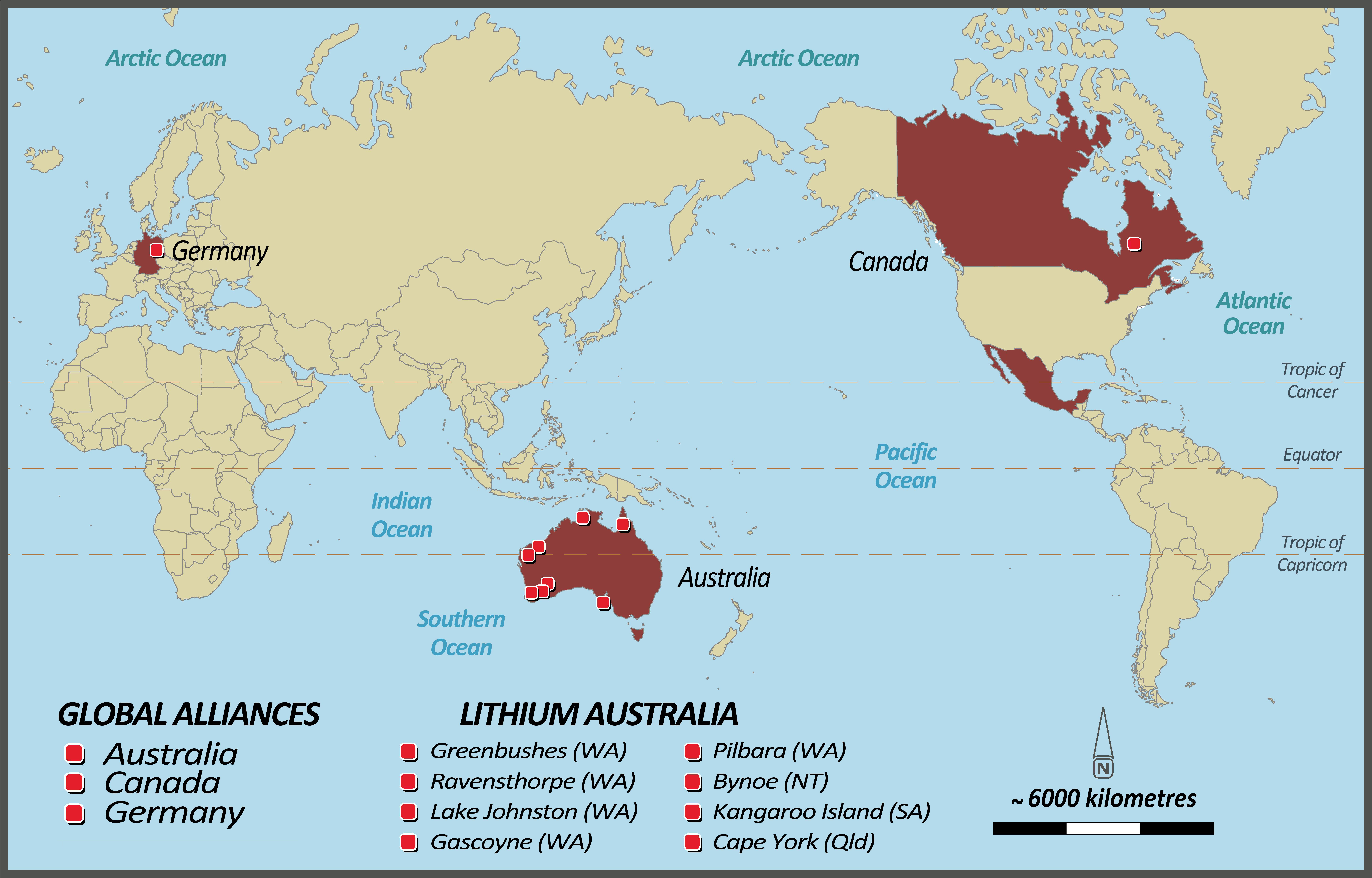 LIT has a technology alliance with MetalsTech Limited (‘MTC’). The latter aims to identify, acquire, explore and develop high-grade hard-rock lithium projects in Quebec, Canada and has also begun exploring for cobalt since it listed. LIT was a seed investor in MTC, with a view to establishing a partnership and collaborative agreement for the use of LIT’s proprietary lithium-extraction technologies, including further development of the technology specific to the spodumene at MTC’s projects in Quebec. A technology licence agreement exists between the companies and LIT was issued a further 1 million shares when MTC listed on the Australian Securities Exchange on 24 February 2017. LIT now holds a total of 2 million shares (2.43%) in MTC, with the ability to increase that holding subject to certain milestones under the technology licence agreement.

The Cancet lithium project is the most advanced asset in the company stable. Following extensive field work during 2017, including some 5600 m of diamond core drilling, an Exploration Target at the Cancet lithium project has been estimated in the range of 15 Mt to 25 Mt @ 1.0% to 2.0% Li2O and 100 ppm (parts per million) to 250 ppm Ta2O5 (tantalum oxide). View more

LIT was actively farming into a joint venture (‘JV’) with Tin International AG (‘TIN’), having spent approximately €750,000 on exploration activity. LIT and TIN subsequently signed a binding agreement in which TIN agreed to sell its interest in the project, including the nearby Hegelshöhe exploration licence, also held by TIN.

TIN will, subject to consent of the responsible German Mining Authority, transfer 100% interest in the two exploration licences for a total consideration of €2 million, of which €500,000 will be cash and €1.5 million payable in LIT shares valued at 105% of VWAP (volume-weighted average price). The initial JV agreement will terminate on completion of the transfer.

In December 2017, LIT announced that Sadisdorf was estimated to contain an Inferred Mineral Resource of 25 million tonnes grading 0.45% lithium oxide, based on re-analysis and reinterpretation of historical drilling and underground sampling.

In the Pilbara region of Western Australia, LIT and Pilbara Minerals Limited (‘PLS’) have entered into a technology alliance, a SiLeach® joint venture, on a 50:50 basis. The aim is to produce lithium carbonate or lithium hydroxide from a SiLeach® processing plant fed by spodumene concentrates from PLS’s Pilgangoora project. View more

At its Hillside project in the Pilbara, LIT has applied for four exploration licences – 102 square kilometres (‘km2‘) in total – covering prospective geological terrain some 80 km southwest of Marble Bar. Historic workings within the project are documented as containing the lithium minerals lepidolite, zinnwaldite and spodumene. Despite the reported lithium mineralisation, there has been no focused exploration to date to evaluate the lithium potential of the ground. View more

LIT has also acquired Exploration Licence 45/4766, adjacent to the historic Moolyella tin field in the Pilbara region of Western Australia. The Moolyella project, which lies 160 km southeast of Port Hedland and 20 km east-southeast of Marble Bar, has an area of 3 km2. Tin-mining operations at Moolyella were mostly continuous from its discovery in 1898 until 1986. View more

LIT has an agreement with Focus Minerals Limited (‘FML’) to explore lithium-prospective holdings in the southern goldfields region of Western Australia. The area contains extensive pegmatite swarms and has a long history of tantalum mining. Under the terms of the LIT/FML Coolgardie Rare Metals Venture (‘CRMV’), LIT will sole-fund exploration to the point of committing to a definitive feasibility study within 5 years of the commencement date, at which time the CRMV will be replaced by a contributing joint venture (LIT 80%, FML 20%).

Metallurgical studies undertaken by LIT indicate the potential to not only separate out lepidolite from surface stockpiles but also  undertake further exploration at the project, which would target possible in-situ lithium resources outside and/or below the current, historic open-pit mine workings. View more

LIT’s 100% owned Greenbushes project comprises exploration and prospecting licences over an area of some 500 km2. Located 200 km south of Perth – adjacent to the world’s largest lithium mine, which currently produces around 40% of global lithium supply – the LIT tenements overlie some 50 km of the prospective Donnybrook-Bridgetown Shear Zone, a regional structural feature that controls pegmatite emplacement at the nearby Greenbushes operations of Talison Lithium Australia. View more

LIT has long recognised the potential of the gneissic terrane of the southwest of Western Australia to host repetitions of the world-class Greenbushes pegmatite mine. LIT already holds exploration titles in the Greenbushes mineral field, so the new applications by Stanifer Pty Ltd (‘Stanifer’) (a wholly owned subsidiary of LIT), which cover some 750 km2, complement LIT’s extensive exploration position in this prospective mineral province. View more

LIT’s 100% owned Gascoyne project consists of five granted exploration licences. Lithium, rubidium and niobium geochemical anomalies, as well as tantalum, tungsten and tin occurrences, have been documented within the holdings. These early-stage prospects, which have not been explored in recent times, will be the focus of preliminary geological reconnaissance, to assess the lithium potential of the area. View more

LIT has staked a prime position in the Lake Johnston pegmatite field, located 440 km east of Perth and 120 km west of Norseman in Western Australia. ASX-listed nickel producer Poseiden Nickel Limited (‘POS’) highlighted the potential of the area in 2016, by reporting the discovery of high-grade, lithium-bearing pegmatites adjacent to its Lake Johnston nickel operations.

As well as its own substantial landholding at Lake Johnston, LIT holds the rights to lithium discovered within the area of two exploration licences held by Lefroy Exploration Limited (‘LEX’). In return, LEX has taken gold and nickel rights over ground held by LIT.

LIT’s footprint has been further expanded through its recently announced Lake Johnston MoU with POS. The MoU is structured to strengthen the position of both companies through greatly expanded exploration acreage in a region of identified lithium pegmatites. Further, existing infrastructure at the mothballed POS nickel concentrator could provide a low-capital entry into concentrate production and the establishment of lithium chemical production via a West Australian-based SiLeach® facility. View more

LIT’s early-stage Cobalark project lies 670 km northeast of Perth and 60 km east-southeast of Meekatharra. LIT has applied for two exploration licences covering 355 km2 over the interpreted Cobalark structural corridor, which is characterised by scattered, late-stage Archean biotite-adamellite granitoids, intruded in places by muscovite pegmatites with the potential for greisen-style mineralisation along the contacts. View more

LIT’s Edah project comprises five contiguous exploration licence applications centred about 70 km west of the gold mining town of Mount Magnet, midway between that town and Yalgoo. The project area was identified as a tantalum prospect, based on regional geochemical work undertaken by the Geological Survey, results of which were published in 2007. Subsequent exploration has identified dense pegmatite swarms in granitic terrain. LIT will focus on lithium and its common association with tantalum mineralisation. View more

Extending over an area of 1,380 km2, the Cape York project tenure was acquired to explore the margins of a leucogranite in an environment geologically favourable for late-stage alteration and pegmatite emplacement. View more

The fourteen permits comprising LIT’s Amber project, which have a combined area of 3,165 km2, secure a favourable tectonic setting over fertile granitic intrusions. Although no lithium exploration has been recorded to date, the region exhibits the geological hallmarks of many of the world’s most prominent lithium provinces. View more

LIT’s Croyden project, EPM 26733, covers  257 km2 overlying granitic rocks of the Esmeralda Supersuite and the surrounding Croydon Volcanics. The tenement is centered on historic tin workings known as the Stanhills tin field. Between 1900 and 1936 it is estimated that 260 tonnes of cassiterite concentrates were mined from numerous small but high-grade lodes. View more

At Bynoe, LIT has established a foothold in the Bynoe Pegmatite Field, located 50 km south-southwest of Darwin, the capital of the Northern Territory. Close to infrastructure, LIT’s exploration licence is part of the wider, 200-km long Litchfield Pegmatite Belt, which has been intruded by a suite of highly differentiated S-type granites, the probable source of the pegmatites and mineralisation. Only very recently has the possibility of significant lithium mineralisation there been considered. View more

In line with its strategy of pursuing potential lithium development opportunities throughout Australia, LIT holds two exploration licences on Kangaroo Island, some 100 km south-southwest of Adelaide, the South Australian capital. LIT’s focus is the pegmatite intrusives into the Tapanappa Formation. These form dykes and sills of predominately feldspar-quartz-muscovite, with varying amounts of topaz, tourmaline, graphite, citrine and apatite. The project contains the Dudley mine, which was operational during the 1890s and early 1900s; it was mined for gem tourmaline, ceramic-grade feldspar, silica and kaolin for brick-making. View more