to fuel the energy revolution.

Lithium (chemical symbol ‘Li’) is a soft, silvery-white alkali metal. The third element on the periodic table (after hydrogen and helium), it has the atomic number 3. It’s density is about half that of water, making it is the least dense of the solid elements. While lithium does not occur freely in nature and makes up only 0.0007% of the earth’s crust, it’s found in nearly every igneous rock and also in mineral springs.

Lithium was first produced commercially in 1923. Aside from its use, historically, as a mood-stabilising medication, it’s also an efficient heat-transfer agent. Indeed, lithium and its compounds are intrinsic to numerous commercial applications, among them the manufacture of high-temperature lubricants, high strength-to-weight alloys (used, for example, in aircraft), heat-resistant glass and ceramics and, in the form of lithium hydroxide, as a means of removing carbon dioxide from the atmosphere of spacecraft.

In the 21st century, lithium’s electrochemical potential makes it a vital component of lithium-ion (‘Li-ion’) batteries. Li-ion batteries do have limitations in terms of cost, safety and stability; however, their energy-to-weight ratio, ability to be recharged many times over, and slow loss of charge when not in use have led three industry groups in particular – electric vehicles (‘EVs’), consumer electronics and the energy sector – to promote research and development into this battery technology.

The need for alternatives to fossil fuels, advances in electric transportation, innovations and growth in the communication and consumer electronics spheres, the use of renewables and concomitant demand for both fixed and portable power storage, the advent of smart grids, the growth of infrastructure-sharing by utilities and consumers and the expansion of the ‘energy internet’ – all will drive demand for lithium far into the future.

Currently, the supply of lithium globally is derived mostly from brines and hard-rock deposits (around 50% for each provenance).

Lithium-containing brines are magmatic in origin and generally associated with volcanic events. The brines are found in the desert areas of Chile, Argentina, Bolivia, the US and China. Lithium from brines (which is of a low grade) is concentrated by solar evaporation from soluble salts. Capital input for producing lithium from brines is high but subsequent operating costs are low.

In Australia, Canada, Zimbabwe and Portugal, conventional mining techniques are used to produce lithium from pegmatites containing high-grade spodumene and petalite. With this form of production, capital input is low but operating costs are high.

Lithium can also be extracted from hectorite (a rare white clay from volcanic sources). Mines for this type of production are currently in development; however, the lithium feed grades will be low and the economics of the recovery methods are yet to be vindicated.

Lithium Australia NL has developed, and aims to apply, patented processing technology – the Sileach™ process – to lithium micas (until now a forgotten resource) and in so doing produce commercial quantities of battery-grade lithium carbonate. To date, the Company’s research suggests that such production will be characterised by low energy inputs and high by-product credits, with low capital and operating costs.

The Sileach™ process can also recover lithium from other silicates. To that end, Lithium Australia NL is involved in an ongoing research programme that has advanced as far as pilot plant testing. 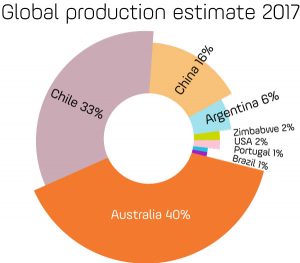 Commercial input of lithium by country.

[Source: USGS Commodities Summary 2017. NB: As production figures for the US are not
currently available, these have been estimated based on reports by Roskill, 2014 and 2015.]